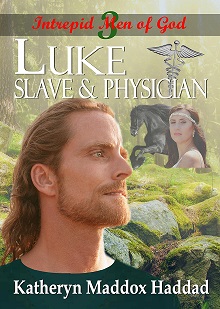 “They refused to listen and failed to remember the miracles you performed among them. They became stiff-necked and, in their rebellion, appointed a leader in order to return to their slavery. But you are a forgiving God, gracious and compassionate, slow to anger and abounding in love. Therefore, you did not desert them.”

God has faith in you when you do not have faith in him. God forgives you over and over. First Peter 3:9 says, “The Lord…is patient with you, not wanting anyone to perish, but everyone to come to repentance.”

God could turn you into a robot and force you to love and obey him. But that wouldn’t be real love. God is Love, and he cannot go against his own nature.

And so God follows you around and pleads over and over, “Come back! You’re in danger. Come back. Follow my Son to safety!”

LUKE: SLAVE & PHYSICIAN.  In Roman times, doctors were almost always slaves and belonged to one family. The legions were just beginning to have their own doctor.  In this story, Luke loses his father at age 8 from a battle between his Nordic village and the Romans.  He is adopted by Theophilus, a tribune, and given training to be his doctor. Then they meet the apostle Paul, become Christians, and Luke is released to be Paul’s personal physician.  Paul’s back has been ripped to shreds so many times, it is solid scar tissue and ten times more sensitive to touch than normal tissue.  Luke works to keep Paul alive.  To BUY NOW, click a book cover or paste this:   https://bit.ly/2FsFwin