In the famous Sermon on the Mount in Matthew 5, Jesus tells his followers to be the “salt of the earth” and the “light of the world.” But what does this look like in the modern workplace? How are working Christians, from the boardroom to the classroom, heeding this call from the New Testament? In Barna’s recently released study on vocation, produced in partnership with Abilene Christian University, we found encouraging signs that Christians are living out their faith with integrity. Previously on Barna.com, we’ve covered data about the sacred value Christians perceive in their professions, the challenges working parents face and the Church’s important role in encouraging faith and work integration. Here, we’ll look at the specific values and virtues that define today’s Christians’ work ethic.

Encouragingly, working Christians say they hold to standards and virtues of professional integrity that represent the Church well. They are rooted in a conviction that Christians should act ethically (82%), speak the truth (74%) and demonstrate morality (72%). On an even more spiritual level, respondents say working Christians should make friends with non-Christians (66%), withstand temptation (59%) and do excellent work in an effort to bring glory to God (58%). Most believe people of faith should be guided by an attitude of humility (63%) and service (53%), while also looking out for others by speaking out against unfairness or injustice in the workplace (53%) and bringing grace and peace to others (48%). The trend is clear: most employed Christians want to do good in their places of work—but not always in a way that stands out. They appear less inclined to see it as their responsibility to be influential: one-third believes they should help mold the culture of their workplace (35%). In addition, only one-quarter says sharing the gospel is a responsibility (24%), pointing to a general wariness of speaking explicitly about faith, an attitude not uncommon in today’s climate. However, the more exemplary Christian workers in this study show more spiritual boldness with a higher willingness to share the gospel than the average Christian worker. 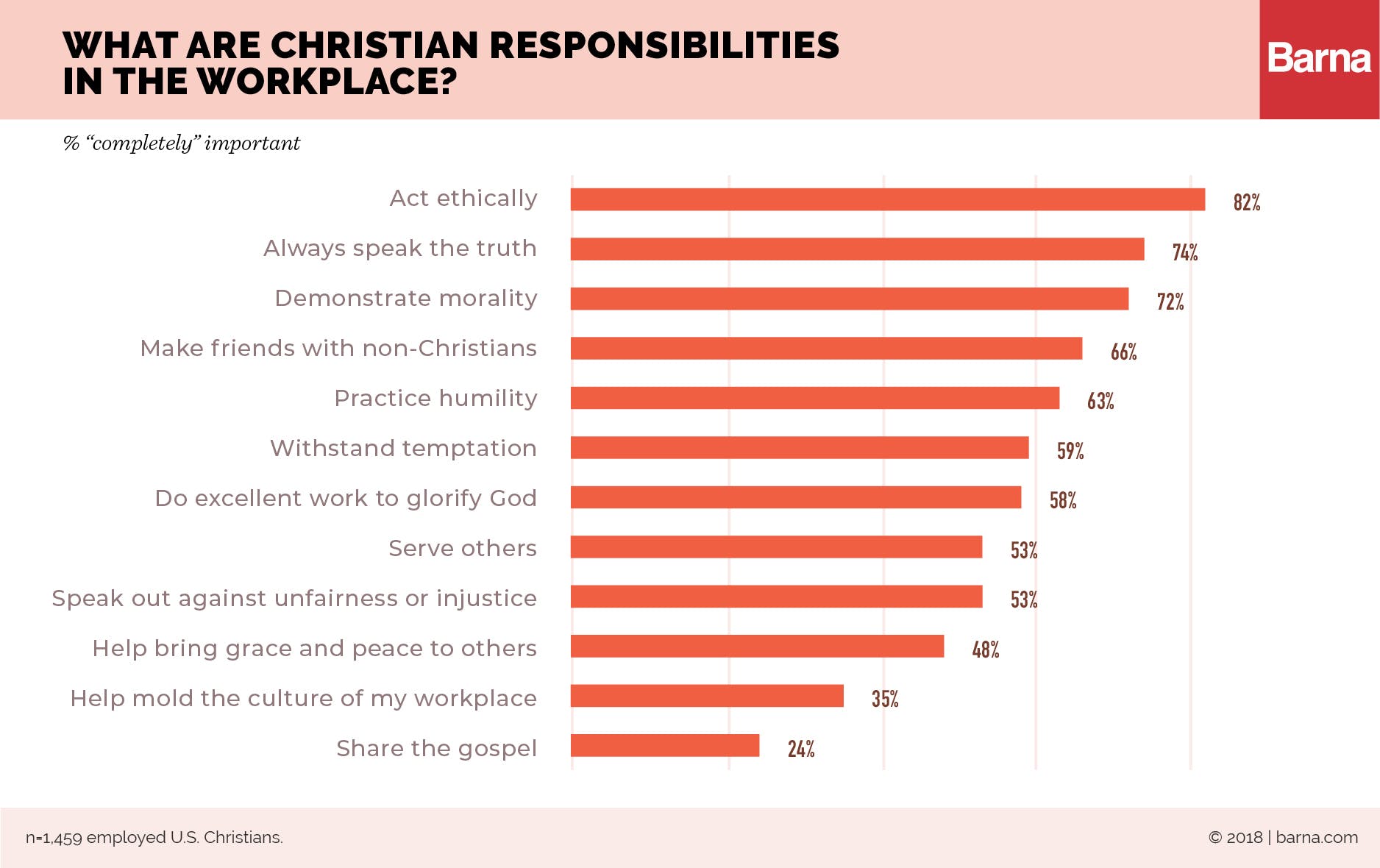 Christian Millennials are the most likely generation to say it’s completely important for Christians to mold culture (40%, compared to 35% of Gen X and 33% of Boomers) or serve others (58%, compared to 51% of Gen X and 51% of Boomers) at their jobs. However, other responses from Millennials imply they have some vocational lessons left to learn: When asked to point to values they should exhibit in the workplace, traits like speaking the truth (68% vs. 78% among Boomers), demonstrating morality (72% vs. 76% among Boomers), acting ethically (77% vs. 85% Boomers) or withstanding temptation (54% vs. 66% among Boomers) diminish in importance among Millennials, particularly compared to Boomers. However, less than half say their church gives them a vision for living out their faith at work (46% vs. 57% of Gen X and 53% of Boomers agree “strongly”). This could be a wake-up call for church leaders to equip the largest generation in the workforce with a deep vocational understanding.