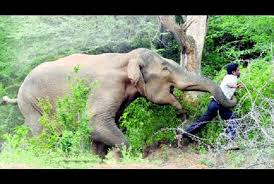 On January 9, Selvam was baptized into Christ. On January 12, as he traveled home on a motorcycle, an elephant stepped into the road. The three passengers on the motorcycle ran, but the elephant caught our new brother, Selvam, bashing his body against a tree. His lifeless dead body laid in his own blood throughout the night, as the angry elephants would not allow authorities to remove his body.

This death follows the death of another man, the husband of a faithful sister, who was killed last year by the elephants. Below, is an article I received from Brother Jaeyachandran this morning:

“The same wild elephant who killed Selvam is coming & standing daily in that same place where you & I went to the village. On that road, the same elephant came & stand in front of a bus and ladies & small children were scared & crying.

Our brother Marudhu & 4 of them immediately said ‘Jesus says go away, Jesus says go away,’ they said continuously 3 times to the elephant, after that the elephant went away from bus & hit the ground with his trunk 3 times. This news was printed in the newspaper & the reporters change the name of Jesus to ‘King’ instead. Our Lord saved the 42 members on that day, we thank to our God.”

Please continue to pray for these terrified souls. This elephant battle is on-going.
~ Don Iverson
Missionary to India